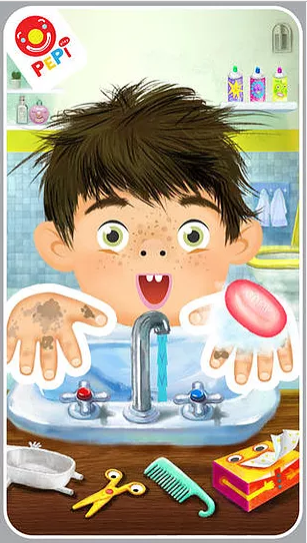 Pepi Bath is another cute Pepi Play app I use often when working on early language goals. This game comes in two versions - with a boy and a girl character. After selecting the preferred option, the child chooses among the following scenarios: doing laundry, washing face, going to the bathroom, or taking a bath. What a fu way to teach kids about hygiene!

Where do we start? Does your child already know some basic body parts such as “eyes”, “mouth”, “nose”, “ears”, and “hair”? Think of one or two words that you think would be the most important (or the easiest ones to teach) and talk about them when playing the game. Make sure to pause for a bit to give your child the opportunity to say the word you have modelled. The goal is achieved when the child is able to both point and label the body parts you have been working on. Goal mastered? Then start teaching new, more challenging words (e.g., “scissors”, “sink”, “tissue”, “tap”, “comb”, “soap”, “faucet”).

Action words are important, too! Within this game, you can talk about “washing”, “cutting”, “brushing”, “combing”, “wiping”, “popping”, “frowning”, “smiling”, and “yawning”. As mentioned in my previous posts, it would be best to choose a few new words (not more than 3-4) and focus on them for some time. Say each word as you are doing the action (e.g., “You are washing Pepi’s hands...Let's wash his other hand.”)

Describing words, or adjectives, are the words that describe nouns. Children with language delays/ disorders often have difficulties using adjectives. No need to wait until your child has mastered all of her/ his nouns and actions to introduce early descriptive words. Here are some examples of words you can practice within Pepi Play: “clean”, “dirty”, “messy”, “pretty”, “nice”, “long”, “short”, “white”, “soapy”,“sudsy”, “hot”, “cold”. Describing words are abstract, and not easy concepts to teach. Make sure your child understands "dirty", before teaching the word "clean".

Children as young as two are able to identify what basic objects are used for. Pepi Bath is an excellent game to work on this goal as kids are already familiar with the objects they see in the app. You can ask them to “Show me the one that is used for washing hands” or “Pepi needs to wipe to his nose. What does he need?”

Once the child is familiar with all the words within the game, you can start developing his or her ability to complete simple instructions. Here are some ideas of what a typical progression of teaching verbal instructions might look like:

Is your child saying “he” and “his” when talking about a girl? Choose the girl character and model many different phrases using “she“ and “her”. “HER hair is messy. I will comb HER hair.” or “SHE is washing her hands. SHE needs the soap.”

Spatial terms, also called location words or prepositions, are the little words indicating the position of items. Some of the early prepositions children learn are “in”, “on”, "under", “behind”. Talk about where each item is and make sure to use several examples when teaching a new concept.

“The toothbrush is IN the cup”.
“The scissors are BETWEEN the soap and the cup."
"The soap is on the counter”.